This is obscenely long. Read the short version if you don’t have much time. Read the rest if you like.

The Short Version: There is a lot of complicated math in the world. We tend to venerate that math for its complexity, and not tell our students about it because they’re not ready to understand it yet. This is terrible. One of the worst things we can ever tell our students is, “You haven’t learned ____ yet, so you can’t learn ____.” We throw up our hands in frustration when our middle schoolers don’t know multiplication facts. “How will we ever teach linear functions?”, we cry.

I am totally guilty of this. It takes a leap of faith to trust that a student struggling with division can work with rational numbers. Assuming they can’t means math is sequential. I don’t think it’s that cut and dry. Sure, prime factorization helps me factor polynomials, but what if you happened to start with factoring polynomials. Is that impossible?

Sending the message that the second step is unattainable until you’ve reached the first is a problem for two reasons:

Maybe you don’t do this. If so, hooray! I’m so glad you’re there. I struggle with this. Number 1 is hard for me and I have to continually remind myself to back away from that kind of thinking. Number 2 is my soap box. I love talking to kids about the good stuff. I love inviting them to play.

The venerable Sam Shah shared this gem on twitter today: 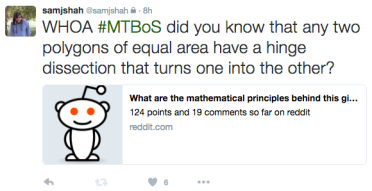 Which lead me to think “What the f*** is a hinge dissection?” Luckily, Sam had followed with: 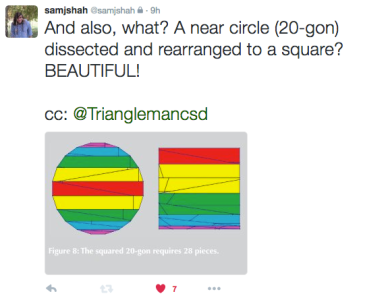 Now I was on board. Still didn’t know what a hinge-dissection was, but that thing is awesome.

So I scanned the reddit page. It was immediately apparent to me that I was in over my head.

“Dehn invariants” No clue what that is, but it’s some kind of restriction, I think. “Is the proof given of this constructive?” Constructive? Like…they built it? Proof by exhaustion? Nah, they’d have said that if that’s what they meant. I should probably figure out what a constructive proof is.

I had no idea what most of it meant. But I really wanted to know how to build one of these things, and I totally understood that gif, so I checked out the actual paper, hoping for some guidance on how to make my own. Let me tell you, that paper is a doozy. Formal mathematical papers are not written with the general public in mind. The abstract took me at least 15 minutes to read. I did not read the whole paper. I scanned it though, and weird things like, “pseudopolynomial,” “Hilbert’s Third Problem” Am I supposed to know about that? They’re saying it like I should know it, and “Rooted subtrees” come up.  Then “Pseudosubtree” and this image pop up, 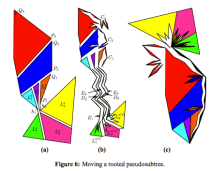 and I was out. This was over my head. I tried, but this paper was not written for me. Which, I acknowledge in my head, is totally fine. The authors had proved something fantastic, and they likely have advanced math degrees. I don’t. The paper was written for people who do. But who cares?! The excellent thing about all this was that gif. I had not been cut off. That gif is utterly comprehendible, and it invited me to play. The paper may as well have been hieroglyphics, but that gif made me want to do math.

I wanted to build one of these guys. I had construction paper. It took me almost an hour to get a 45-45-90 triangle to hinge dissect into a square, but I think I did it. It was loads of fun.

[Update: I found the much easier hinge dissection for this and slapped my forehead. But I maintain that the first one was still fun.]

How this relates to my classroom

I don’t think I am alone in occasionally looking at a learning target I have to teach and thinking, “Barf. That’s boring.” I just don’t get excited about multiplying decimals. I do get excited about infinity and non-euclidean geometries. I love tessellating. I love irrationality. I love hexaflexagons. I LOVE PRIME NUMBERS. (There is a prime out there that has at least a billion digits. Isn’t that amazing?!? It gives me butterflies.)

And then I look at my learning targets and read, “Students can solve a one-variable equation.” Sigh.

I get it. Solving is fundamental. Proportionality can be beautiful. I have seen the joy on student’s faces when they finally understand one of those learning targets. They are so proud. I am so proud. We’re just a bundle of proud happiness. It’s lovely. I’m not objecting to this.

What I cannot STAND is that we embargo what I consider to be the “really good stuff” until late high school or college because it’s too complex for students. That’s insane! We want kids to love math! Why, for the love of Pete, WHY would we hide the good things from them until then? I remember sitting in a college class having just learned that there are different sizes of infinity. I was simultaneously in awe of that fact and furious that NO ONE HAD TOLD ME. No wonder I hated math in high school.

“But students aren’t ready for that in high school,” some people say. “They have to learn about irrational numbers first, and before that, rational numbers, and before that…”  I have said this. I have thought this. And I am now here to say: that is stupid and unhelpful. You want kids to love math? Let them play. Let them investigate something, even if they’re not going to understand the whole thing.

You want to know something amazing? There’s a thing, called “Gabriel’s Horn”. Looks like this:

Except imagine that tail (right side) keeps going forever. Gabriel’s Horn has a finite volume. You could fill it up with paint. But guess what? It’s surface area is INFINITE. As in, YOU COULD NEVER PAINT THE WHOLE THING.

Did you need an advanced math degree to understand that? No. Have you proven it to yourself? Also, no. You’re taking my word for it. But who cares? For those who’ve never seen it, you just learned a super amazing thing. Doesn’t it make you want to figure out why? Doesn’t it make you want to do math? Ever talk to your students about surface area or volume? Think it’d be impossible to drop this anecdote in? When I talk to kids about Gabriel’s Horn, I can barely control the excitement in the room. Kids burst with questions. They want to learn math.

I know that not everyone has the math obsessions that I do, and that part of the reason a lot of math teachers don’t tell students about these things is that they’ve never seen them before. That’s on me and any of the rest of you out there that knows something awesome. Which is probably most of you. A teacher could spend their whole career learning how to teach fractions, and darn it, that would a career well spent. I could learn a lot from that person. But since they’ve spent all that time and energy on fractions, they’ve had less time to find out how many spaces are created by crossing n lines (It’s bananas, you should try it).

Tracy Zager recently talked about how we need to learn from each other. This is one way I can do that. I can share the weird math stuff that I investigate in my free time with an elementary teacher who can help me make sense out of how my students think of multiplication.

For those of us who have taken lots of math courses, I get it. To understand some of those proofs we learned we had to work REALLY HARD. We want that work acknowledged. Finally understanding some complicated, crazy proof feels like being let into an exclusive club. There’s this beautiful thing you have – this understanding – it’s like a secret language that let’s you into conversations with other people who have worked as hard as you on that content.

Sometimes, we try to share that knowledge. We start explaining it to someone who hasn’t experienced all this complicated math recently, and they look back at us blankly. They want to understand… but they just don’t. They don’t speak the language yet. So we give up. We huddle back into the circle of people who “get it”.

I have done this. Many times. But if you are a teacher, you know something awesome, and the opportunity arises to share that, you should. If you don’t share it because sharing it will be too hard… then you need to think more about how to make that knowledge accessible.

I had the great privilege of spending some time with Edmund Harriss at TMC, and he tried, very patiently, to explain some super confusing non-Euclidean geometry to me. At one point, he had lost me, but I didn’t want to admit it. A minute later I was REALLY lost, so I braced myself and asked him to go back and help me understand. His response was perfect. He was happy to go back. He said (paraphrasing here), “I understand this. What we’re trying to do here is help you understand it, too. If we do that, then we’ll have built something.” Golly, that was beautiful. I felt so welcomed. It was okay that I didn’t get it yet. And he modeled beautifully what it looked like to realize that your pedagogy wasn’t cutting it. His explanation hadn’t worked for me. He had to change tack.

I need to do this. Maybe I can’t explain all of how to derive the explicit formula for the Fibonacci series, but darn it, I can share some of it. If you don’t know how to start, go talk to an elementary teacher. They are EXPERTS at teaching complicated things to audiences with little prior knowledge. I bet you’ll have a really cool conversation.

I know that the standards aren’t all of a sudden going to be, “Students can make hexaflexagons.” But I’m going to continue trying to sneak these things in. I don’t love math because of decimals. Nor equations. I love math because of fractals. Because of Taxi Cab Geometry. And I want EVERYONE in the club.

4 thoughts on “Multiplying is Not a Pre-requisite for Fractals”